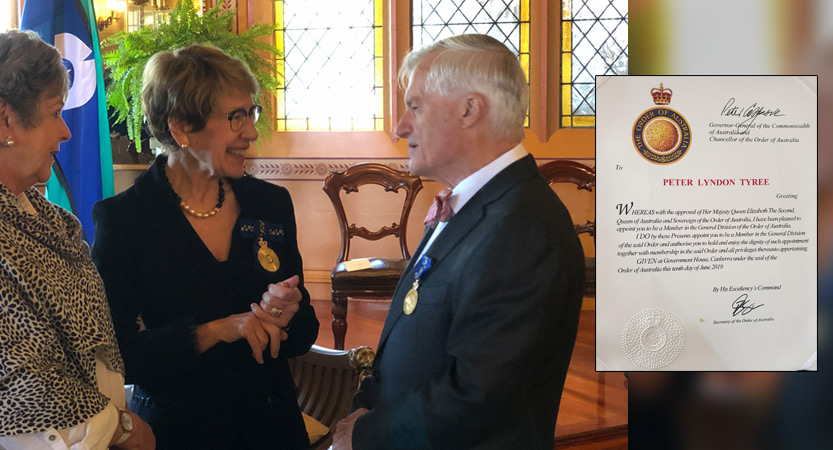 Peter Tyree recognised for Services to Engineering and Education.

We are delighted to report that Peter Tyree has been honoured by being made a Member of the Order of Australia for Services to Engineering and Education.

Peter was an integral part of the Tyree Group when it re-commenced transformer manufacture in 1978 working very closely with his father, Sir William Tyree in building the company’s capability alongside other businesses of the wider Tyree Group.  Peter was appointed Executive Chairman and CEO of the Group in 2001 and is very proud to have worked most of his life in one of Australia’s largest and successful private enterprises which has continued to expand and grow over its 75 year existence.

What is particularly exciting is that Peter and his late father have both received honours for services to Engineering and Education.  His parents, Sir William and Lady Tyree founded the A.W. Tyree Foundation in 1971 and since its inception, the Tyree family have long held the belief that Australia must focus strongly in the areas of education, community support and medical science.   These beliefs remain fully ingrained in the DNA of the Tyree Group as we know it today.

As the custodians of the present-day Tyree Group, the Directors and Executives of the business continually reinforce the cultures, customs and ideals that the Tyree family based the business around and will continue to respect these core values throughout the business’ operations.

Peter’s wife Helen reports Peter remains full of energy and though in semi-retirement,  he is busier than ever in roles as diverse as being an Adjunct Professor in Electrical and Telecommunication engineering. Chairman of the Tyree Foundation and as a business consultant specialising in assisting entities in financial distress.

I am sure you would like to join with me and the current staff of the Tyree Group in congratulating Peter on his award.